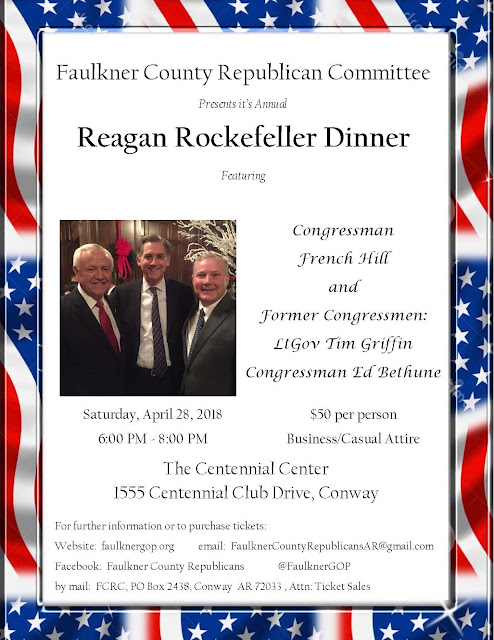 Posted by Washington County AR GOP at 2:11 PM No comments: 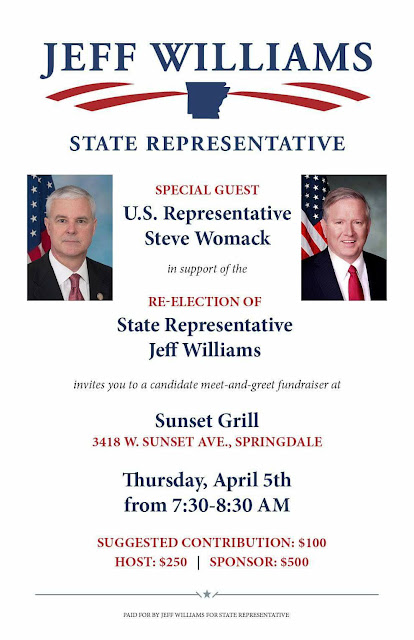 Posted by Washington County AR GOP at 5:00 AM

Meet Dawn Clemence • Change we need. The voice we deserve. 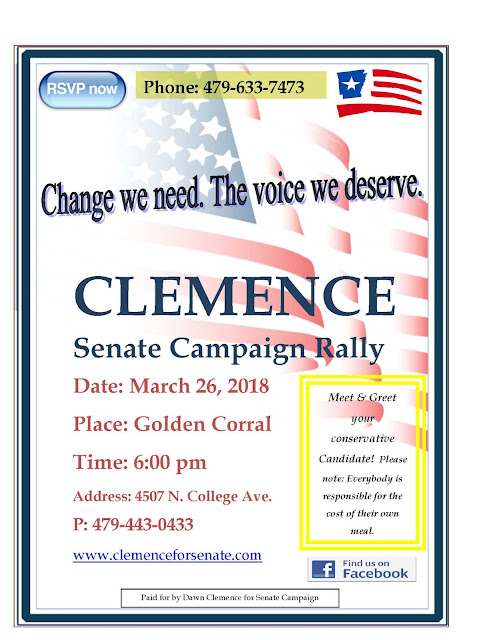 Dear Fellow WCRC Member,
Attached is the WCRC Call to Meeting for 7 pm on Tuesday, March 20, 2018, to be held at the Willie James Event Place, 1161 West Henri De Tonti Blvd, Springdale, AR 72762. The doors will open for registration at 6:30 pm. Be sure to sign in so we can accurately account for your attendance.
The program for this meeting should be interesting. Land Commissioner John Thurston and Representative Trevor Drown, both of whom are running for Arkansas Secretary of State, have agreed to come speak with us. Your 1st Vice Chairman, Patrick Deakins, will MC. The event will include opening and closing campaign statements from both, with a middle segment designed for each candidate to respond to a pre-determined set of questions. If you have a question that you would like to have considered, please send to patrick.deakins@gmail.com as soon as possible.
Notification of proposed rule change: Please be prepared to vote on a proposal to move our meeting time from the 3rd Tuesday to either the 1st or 2nd Tuesday of the month. Details will be presented at the meeting.
If you are unable to attend and you wish to maintain Active WCRC membership status, a completed proxy is necessary. Your proxy will also help us insure we have a quorum on hand to conduct committee business. Proxy forms for this meeting are attached in both PDF and Word format. Let me know if you have any questions about how to complete a proxy.
NOTE: Completed proxies may be delivered to the meeting in the following ways:
See you there!
Kindest Regards,
Jim Estes
Chairman, WCRC
479-225-0969 mobile
jestes65@reagan.com

"To live under the American Constitution is the greatest political privilege that was ever accorded to the human race."  Calvin Coolidge
Posted by Washington County AR GOP at 1:09 PM

Tickets can be purchased at EventBrite

Bring your device and leave the session up and running!

Republican candidates for office are invited to attend a special workshop on Campaigning with Social Media. Registration is limited to the first 60 participants.

Tickets can be purchased at EventBrite

Be ready for a fight, Northwest Arkansas GOP warned 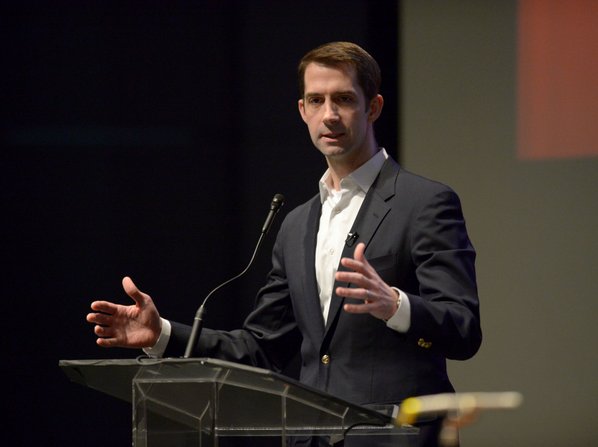 Senator Tom Cotton speaks Saturday, Feb. 3, 2018, during the annual Washington County Republican Committee Lincoln Day event at the Springdale High School Performing Arts Center.
SPRINGDALE -- Be ready for a hard-fought battle for control of Congress in the general election in November, both U.S. Sen. Tom Cotton and 3rd District Rep. Steve Womack told a crowd of about 700 at the annual Lincoln Day fundraiser at the Pat Walker Theater at Springdale High School.
"Some Democrats are already measuring the drapes," expecting to take majority control in the next election, Cotton said while predicting that effort would fail. But every single primary election will be studied by each side's experts to discover trends and openings. The May party primaries in Washington County will be one of the elections watched closely to see how a Republican-friendly area performs in a contest, he said.
The GOP fundraiser, one of the state's largest, was attended by a who's who of state elected officials. The chief honoree of the night, though, was Matt Mika, a longtime organizer of GOP events who was severely wounded at one of those events -- coaching the GOP Congressional baseball team June 14 in Alexandria, Va., when a gunman opened fire. Mika was called to the stage by Womack and made, for the night, an honorary member of the University of Arkansas baseball team, complete with a jersey signed by the team.
Mika thanked U.S. Capitol Police officers David Bailey and Crystal Griner by name for preventing the deaths of anyone on the team, including him. Mika is director of government relations for Tyson Foods and was hit twice in the chest by rifle fire.
"I'm not supposed to be here," Mika told the crowd, telling them all to "Be in the moment." Always remember when with your family that you might never have the chance to see them again, he said. He received a standing ovation after his remarks.
Others speakers besides Cotton, the featured speaker, and Womack included Gov. Asa Hutchinson, while at least three other statewide office holders attended: Lt. Gov. Tim Griffin, Attorney General Leslie Rutledge and state Treasurer Dennis Milligan. Hutchinson graduated from Springdale High School and said he was glad to be back in the region. He's the first native-born resident of Benton County to be elected governor, according to the state records. The only previous governor from Benton County moved there as an adult.
"Washington County, with its growth and quality of life, shows what private enterprise can do," Hutchinson told the crowd. That kind of success across the state, encouraged by the state's GOP majority, will be rewarded by voters in November, he said.
Cotton also predicted the strong economy and removal of the "hated individual mandate" that would have required people to "buy health insurance after the government made it unaffordable" would be recognized and supported by voters in November. He also mentioned the tax cut recently approved by Congress and signed by the president.
Joshua Mahony of Fayetteville, Womack's only announced Democratic opponent, said his opponent and Cotton should check back with constituents more often and at other locations than GOP fundraisers.
"Steve Womack and Tom Cotton are in Washington, D.C., so much they can't see the groundswell of anger rising up among Arkansans over their voting to take away our health care and giving tax cuts to the wealthy and leaving the crumbs to middle-class Arkansans," Mahony said.
The loudest applause Cotton received in his speech was when he brought up moving the U.S. embassy in Israel to Jerusalem, a longtime goal of conservatives.
Pat Dicesare of Florida was in the region to visit his daughter in Prairie Grove. He and his family came to Saturday's event in large part to see Cotton, he said. "He's been a great supporter of the president and I think he's on the fast track to bigger and better things," Dicesare said before Saturday's event began.
In remarks before the event began, Cotton said the recently released memo by Republican members of the House Intelligence Committee "does raise troubling issues" about use of domestic surveillance issues. Cotton has been a strong supporter of renewing the powers for such surveillance but said there needs to be strong congressional oversight. The Democratic members of House Intelligence have drafted a counter-memo which didn't pass a committee vote to release, but Cotton said he hopes it's released. "I would like to see it," he said. Cotton is a member of the Senate Intelligence Committee but, as such, isn't at liberty to discuss whether he has seen all the classified background documentation the memo is based upon.
Womack recently won the chairmanship of the powerful House Budget Committee. He said Congress is most likely to pass yet another temporary spending measure instead of a regular budget, but said frustration on both sides of the partisan aisle is building up support for major changes to the budget process in the future.
"I've been there seven years, and I've not seen regular order since I've been there," Womack said of his time in Congress of the regular budget process brought through to completion.
"This is no way to run any business, much less the federal government," Womack said.
Exactly what kind of changes Congress could make to budgeting has yet to be thrashed out, but there are proposals aplenty, he said.
Hutchinson, Lt. Gov. Tim Griffin and Attorney General Leslie Rutledge also expressed confidence Republicans would do well in November, particularly in Arkansas. "The changes we've seen in the last decade were not some pendulum swing that will swing back every couple of years," Griffin said. "It was a seismic re-alignment." All the state's constitutional officers were Democrats as recently as 2010, state records show. Now none are.
NW News on 02/04/2018
Posted by Washington County AR GOP at 9:35 AM